This is a tileset that I'm making for a hack, and this will be updated from time to time. This is the global tileset, so I'm taking things off of it to put on to actual game tilesets. It just seems to be an easier way to organize things. Also, disregard the trees and the in-progress tiles at the bottom, that is a really big tree that I'm making.

If you use it, give credit.

It uses some tiles from the GB/GBC Legend of Zelda games.

I like to make world maps. They're low-quality Paint maps, but feel free to use them as long as you give credit. (for the concept) 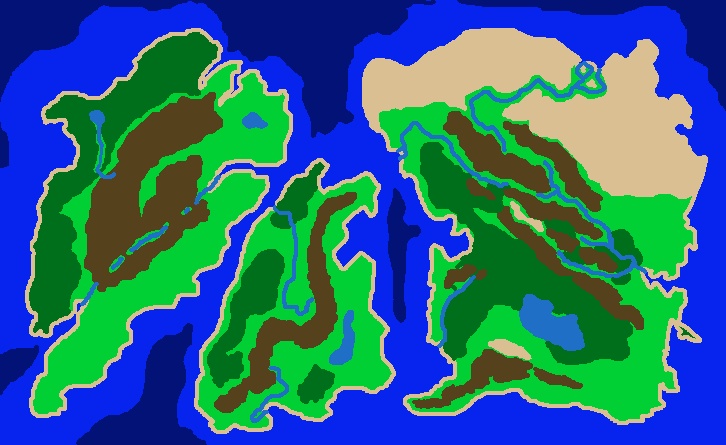 Hey, that looks pretty good! Also, I was working on this before you posted this, but since I can't remember where I found the pagoda tiles (that look identical to yours) I will credit you if you wish.

(Replaced colours in the Tile Arranger manually after taking the screenshot, obviously)

I don't know exactly what my plan is for this tileset yet, honestly, but I was in the mood to experiment with one. I'm sure I'll use it eventually. (Also, if you guys want to use my tiles as well, you are welcome to but give credit. Mine wasn't posted in a good format for that though, so later on I will post it in its own thread with more demonstrations of how the tiles work together).

No need to credit me for the pagoda tiles because I ripped them off of this tileset. I had absolutely no skill in spriting at the time so it would've been worthless to try to draw them myself.

Ah yeah! That looks familiar, I probably just ripped them from the same place you did. That's from the cutting room floor where it showed the beta tilesets.

Here is the updated tileset.

Here are some tilesets and random tiles. You don't have to ask permission, but give credit if used!

Slightly updated version of the tileset I posted earlier, but in a more usable format.

Underwater tiles, including a shipwreck. Made for Sterling Silver.

The Battle Tower from Pokémon Christmas. You'd want to change it to not have snowy roof tiles I'm sure. Most tiles come from Crystal, but I did modify them a bit.

This has several tiles taken from Pokemon TCG for Gameboy. You could maybe use this for an Elite Four room, for a challenge tournament, etc.

A Safari Zone tileset. Don't remember when or why I put this together.

Not a tileset, but random devamped graphics. You'll notice the bag from Ruby, Flannery from Pokemon Christmas, and the version of Brendan from Ruby that we made for the old SaR.

More random graphics. The Gym only uses a handful of actual tiles, but it is put together to show how they would go. Those tiles are in the first tileset in the list.

Random game consoles. You would want to make these as tileset images, not events. The white would go transparent as a sprite.

A tileset with graphics from Pokemon TCG. You'll recognize these as Practice Battle Machines from the Battle Tower in Pokemon Christmas.

My Pokemon Center tileset that everyone loves.

The Beta Tileset image that came with Goldmap, converted to a size and color format you could actually insert.

A beta tileset from Sterling Silver, that would have been used in the new region. Probably missing some tiles for functionality, and would benefit from being expanded.

Sorry for replying to these old posts, but I wish that this site would revive. I really like you tiles Mateo.